It’s the unexpected midweek bluebird days like today that make Mt. Baker my favorite place to ski on the planet. The weather reports were calling for more storm action (seems like the daily standard for this March) but apparently Mother Nature didn’t get the memo. When photographer extraordinaire Grant Gunderson and I got up to the parking lot it was blue!

There’s only one thing to do on a day like today and that’s go for a skin. I put a rather steep and challenging skin track up the first face above Chair 8 and Gunder and I quickly bagged a couple “one turns”, just in case the weather crapped out on us. By the time I was done with my second shot there was an army of skinners on the way up to Shuksan Arm. Among the first wave was Paul Kimbrough, who is in my opinion one of the strongest telemark skiers on the planet. We discussed the “Slingshot Gap”, which is a classic air that rarely gets attempted. Paul had tried it a few times before with limited success, but today it was looking prime. Paul wisely skied Slingshot (the line, not the gap) and then cycled back up, sent the air and completely STOMPED it. I’m going to say he’s the first free-heeler to ever attempt let alone stomp that thing, and if you know otherwise, feel free to call me out.
Here he is skiing Slingshot. For reference, Slingshot Gap involves airing from the top of the sunny spine above the cliffs OVER the ramp he’s skiing here and landing just to skier’s right/looker’s left of the rocks to his left. It’s gotta be in the ballpark of 100′ from takeoff to landing and you need some serious speed to clear it.

Also on the hunt for some action was Jackson Hole shredder Corey Felton. He and his brother Taylor had rolled into town the day before. Unfortunately, Taylor decided to deal with some RV maintenance and missed out on the action but Corey was all about it, first shredding the Hollywood spine and then sending 50-50 (he was in the latter 50 if you’re keeping score).

While those guys were teeing off on the Hollywood airs, Jesse Goosman and I went farther out the Arm and got some primo long-lens action. Here are a couple frame grabs from my POV camera.

Once we had all cycled back up to the top of Chair 8, we decided to head up and work some close-up shots. Matthias Evangelista is hiding behind Grant and Austin (Corey’s filmer).

Corey shredding. Grant and Austin have the $$$ angle.

The views in this neck of the woods are pretty marginal. 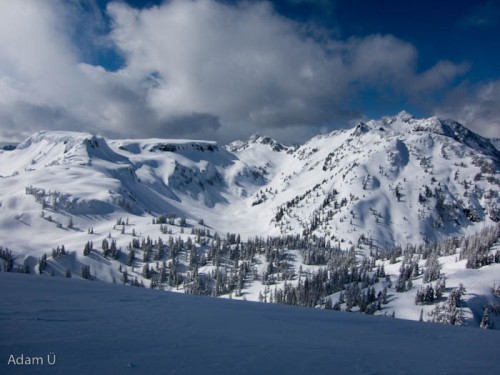 Matthias getting artsy at the end of the day.

I shot a handful of photos with my snappycam. Grant shot somewhere around 32 gigs and claimed it was his best day of the season. It was probably mine too; how can you go wrong with perfect snow, awesome light, great friends, and a full day of shredding, spectating, and “working” (if you can call it that) in the mountains? Dorothy was right – there’s no place like home.